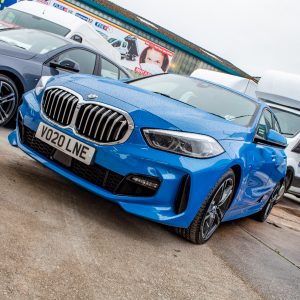 When it comes to luxury car hire, you’re always on safe ground with a BMW. The third generation 1 series is all new for 2020 and has just landed here at Westwood, specifically, the BMW 1 Series 118i M Sport Auto and it’s magnificent!

The BMW 1 Series has been a hit since it was first introduced. The smallest car in BMW’s range, it provides a premium alternative to the mid-size family hatchback buyers who want something with a little more brand appeal than the all conquering Ford Focus. Now in it’s third generation, the 1 series features the same design language as the latest versions of its bigger brothers, but being a complete redesign rather than a mere facelift, the 2020 BMW 1 series updates are more than just skin deep.

Leaving Behind The Rear Wheel Drive

The single most radical change from the first two generations is the switch from rear to front wheel drive. While petrol head purists might raise their eyebrows at this choice, that’ll be because they’ve not driven the new 1 series yet! On the road, the new BMW 1 series is as keen a drivers car as it’s ever been and of course, because we have the M Sport versions, the suspension is firmer (without being harsh) and the wheels are bigger, giving you a far more engaging driving experience o those winding country lanes. As well as turning heads around town thanks to the distinctive sporty styling of this upgraded trim. M Sport trim also gives you leather seats, ambient lighting and a pleasing array of extra tech both in the cabin and under the bonnet.

The BMW 1 Series M Sport is a premium family hatch, but that doesn’t mean it won’t make you smile when you’re in the mood for a little exuberance! The 1.5 litre turbo assisted petrol engine will happily cycle through the gears of the 7 speed semi automatic gearbox and propel you past 60 mph from a standing start in a respectable 8.5 seconds. Allied to the supreme handling and selectable driving modes, it’s a perfect formula for having a bit of fun while you’re travelling from A to B. Capable of returning over 44 mpg on a combined cycle, that performance isn’t going to hit you in the pocket either.

As befitting a premium car, the inside of the one series is as refined and well put together as you’d expect. It’s classy without being overtly opulent. An understated quality pervades, providing exactly what you need where you need it. It’s logical, practical and functional, but without being austere. There’s a reassuring weight and precision to all the controls and switchgear.

It’s not all function without frivolity though. There’s absolutely no need for selectable, multi colour ambient lighting, but the one series has it anyway and we think it’s better for it!

Switching the driven wheels has left the interior significantly larger than the outgoing model, leaving front and back seat passengers with more space in which to enjoy the distinctly premium interior. But despite the roomier interior, the car is a little shorter than the outgoing model making parking that bit easier. On the subject of parking, you get all round parking sensors and a user friendly visualisation which gives some idea of obstacle shape as well as proximity.

The large, clear touchscreen is where most of the many selectable options and functions are accessed, however, if you’d rather not get fingerprints on that glossy screen, you can choose voice control, or the intuitive rotary controller located low down in the centre console. The latter probably being the go-to option for navigating the various menus.

Drive Away Today In The BMW One Series M Sport

Naturally, as you’d expect with any luxury cars for hire from Westwood, or indeed any rental vehicles from us, you get more for less. Not only do you get a brand new premium car you can drive away in today, but you get a high spec’ version of your chosen vehicle for less than you’d expect to pay for an entry level model.

In fact, we challenge you to rent for less!