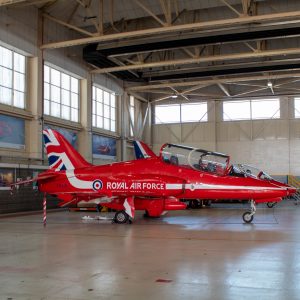 At Westwood Motor Group, you’ll often see a selection of Range Rovers, Land Rovers and Jaguars available at our head office, either for sale or for luxury car hire.

Thanks to the great relationship we have with JLR (Jaguar Land Rover) we were privileged to receive an invitation to attend one of their highly exclusive corporate events – a night’s stay in Lincoln, followed by a chance to visit RAF Scampton, the home of the legendary Red Arrows, which included the opportunity to meet the elite pilots, their ground crew and to get up close to the world famous fast-jets.

You may, or may not know that JLR are the fleet provider of The Red Arrows and are heavily involved in the teams activities.

We selected our Marketing Manager; Chris Ellison, to represent Westwood at this event and following is Chris’s account of his experience.

Meeting The Red Arrows – My Trip To RAF Scampton

It came as a very welcome surprise to be selected to represent Westwood Motor Group at such a terrific event and to be given the time away from the office in order to attend. After a slightly extended trip across the Pennines to Lincoln, I arrived at the White Hart Hotel, an opulent 14th century hotel adjacent to the historic Cathedral. My room was on the top floor and the front of the Cathedral was visible from my room – a great view and a superb welcome to the City.

After settling in, I headed downstairs to the bar area to meet Kara and Fiona from JLR and the other delegates. I had assumed that there would be far more people there than the dozen or so who were attendance. We were joined soon after by some of Red Arrows team and it was a curious experience to be in a bar casually chatting to Squadron Leader Gregor Ogston (Red 7) and Flight Lieutenant Damo Green (Red 2) who just the night before I had watched in the Red Arrows series, with the latter rushing home in time for his daughter’s birth while the former replaced him in formation. I got to witness first hand how Gregor gracefully dealt with the attention of a rather tipsy American Lady who also happened to be in the bar area and thought he looked like her dentist!

A little later we all moved to the restaurant and I enjoyed a great meal and great conversation with the group. Everyone was having such a good time, and the evening flew by (no pun intended). Before we knew it, it had turned 11pm, the RAFAT team departed for their base and in turn we all slowly retired for the evening in preparation for the following day.

Following a pleasant breakfast, again, courtesy of JLR, myself and the other guests checked out and each of us made our way to RAF Scampton, meeting up with Fiona and Kara in the car park just outside the base. We all collected our passes and drove in convoy to another car park within the base. From there we were led inside into the Red Arrows’ briefing room, where the pilots in attendance greeted us warmly and served us coffee before giving us our first briefing of the day. 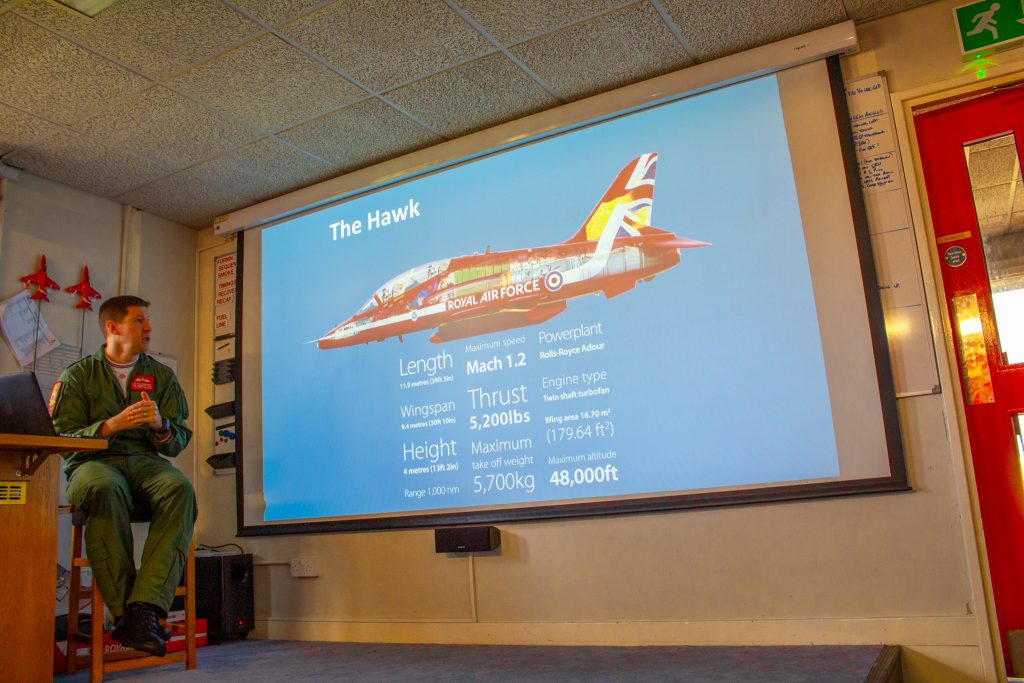 Following was a fascinating insight into the daily lives of the Red Arrows and the support team that keeps them in the air.

I was surprised to learn that the Hawk Fast-Jets – the planes used by the Red Arrows are over 30 years old. They’ve stood the test of time by being robust, well engineered and well made, making them easy to maintain and incredibly reliable. It’s clear how much pride the Red Arrows team take in this British Made triumph of engineering excellence and their combined role as ambassadors for the UK both at home and abroad.

We were taken on a tour of the hangar, getting up close to iconic red Hawk jets themselves, ably guided round by members of the engineering team.

I was surprised at just how light the Jets were after witnessing ground crew manoeuvring planes by hand within the hangar and just how small the jet engines were. The cockpits were almost completely analogue, with instrumentation being all dials and physical switches and the stick control being directly connected to the wings and tail – a farcry from modern jets where there’s electronics and computer in between pilot and plane.

The light airframe and minimal direct aids mean that the planes handle very much like sports cars, with the pilots being in direct control of everything. 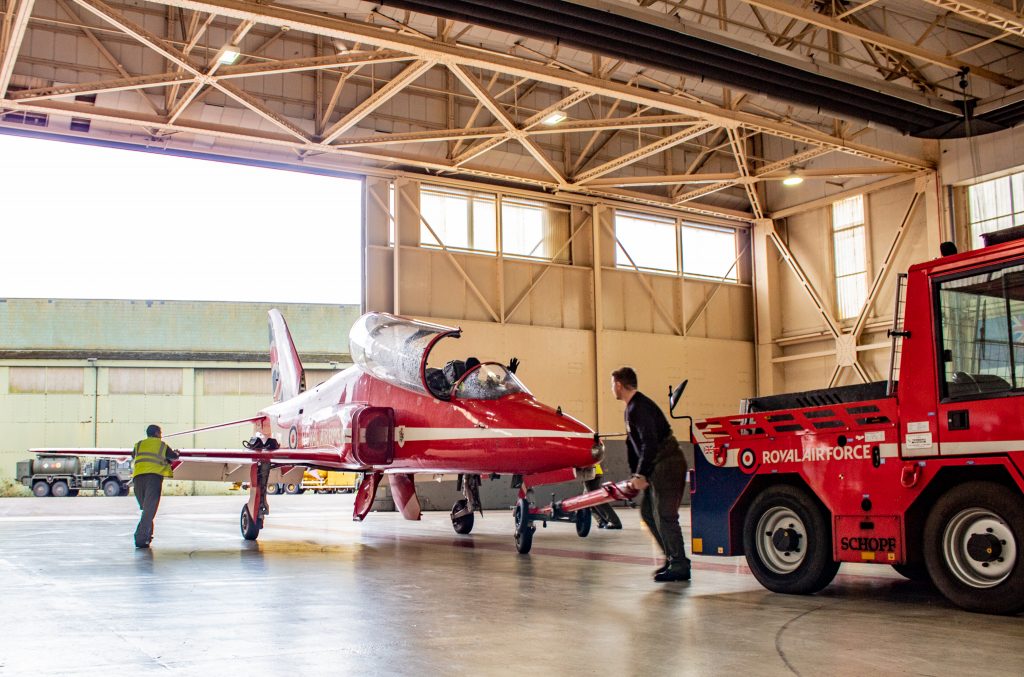 Also surprising was the true purpose of the angular lines which are clearly visible in the perspex cockpit canopy. The whole ejection process was throughly explained and rather than being guides to assist pilots in lining up a formation, the lines are, in fact, embedded strips of plastic explosive, shaped to shatter the canopy in the event of a pilot having to eject.

It was explained that the famous red white and blue smoke trails are simply plain diesel fuel fed from a modified ordnance pod into the jet exhaust stream, where it’s instantly vaporised. The blue and red colours are just dye added to the diesel fuel, with each colour kept separate until used and activated by a button on the control stick. A full pod contains enough for 5 minutes of white spoke and a minute each of white and blue.

We learned later that there’s a penalty in beer for leaving smoke on for too long!

Unfortunately, on the day of our visit to RAF Scampton, the after effects of Storm Ciara were still being felt and although the ground staff were watching the weather all day just in case a window of opportunity opened, the wind never quite dropped enough to allow the jets to get off the ground so we could see the famous team in action.

However, this did allow us to spend more time with the team on the ground and receive additional insights into how the famous 9 ship formation is split into sub-teams  (‘Enid’, ‘Gypo’ & ‘Synchro) when performing. 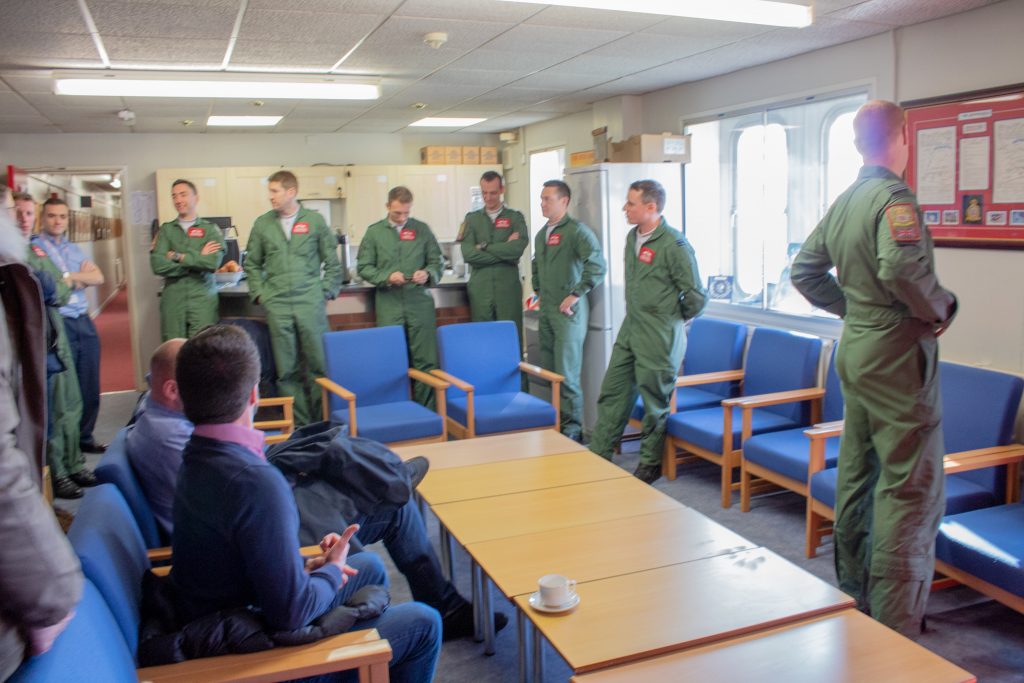 All too soon, our day with the RAFAT team was over and it was time to set off back home to Manchester. It’s been an incredible experience and I’d like to take this opportunity to thank the the Red Arrows team for their incredible hospitality, to Jaguar Land Rover, in particular to Fiona and Kara for the invitation and for organising such a great day. Last, but not least, my thanks also go to our MD Chris Melling for allowing me to represent Westwood Motor Group at this unique event.