Petrol, Hybrid or Diesel – Which? Review

Petrol, Hybrid or Diesel? The Which August 2018 car review investigates…

Which fuel types are the most economical, and most and least polluting

‘In the motorway fuel tests, Which? found that the fuel economy for diesel vehicles was, on average, 41.5mpg, hybrids 37.2 mog and petrols were less efficient at 36.8mpg’ 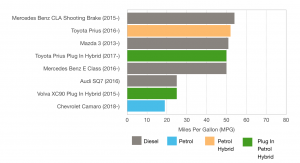 ‘Hybrids are the most fuel efficient cars. Running completely on electric or part battery power means fuel use is very low. Petrol cars were a close second. Fuel economy for diesel is poor.’

‘The VW Passat GTE plug in hybrid had an impressive overall fuel economy of 74.3 MPG. Averaging about £720 per year in running costs, this is extremely low for an estate. The Mazda was the only pure diesel in the top 5.’ 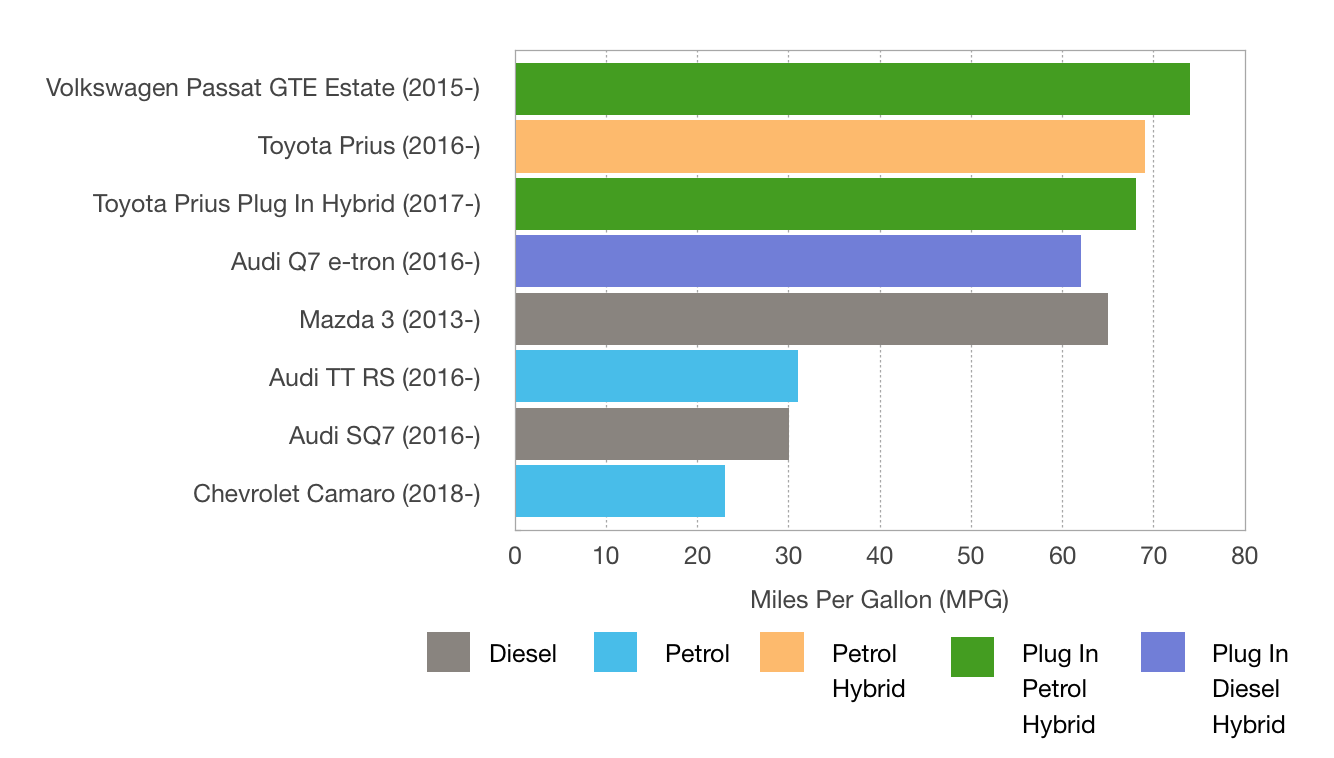 Petrol, hybrid or diesel? Which? explains the best mpg

Usually, diesel cars come out on top for fuel economy in Which? tests. This is because they are the most efficient fuel type when on fast roads. However, the motorway mpg chart shows Toyota stealing the spot with their Prius models. The regular and hybrid have mpg of 52.3 and 49.6. This beats all other hybrids tested and nearly all others tested on Which?’s test programme up until now.

So, what does this mean in terms of fuel costs? Which? say that some hybrids have less than an £800 annual fuel bill. That’s up to £180 less that the most effective non-hybrid petrol or diesel car. It’s almost £400 cheaper on the average diesel and £450 on the average petrol car.

The cost of diesel

According to the Society of Motor Manufacturers and Traders, diesel cars made up 50.1% of new car sales. Any car producing less than 100g/km or CO2 was tax free, meaning people were drawn to diesel. However, the scandal of the VW emissions test saw the recall of 10.7m diesel cars all over the world.

Cities, like London, came up with initiatives to ban diesel cars. In the UK, a diesel car with low CO2 no longer allowed you to be tax exempt. Rather, it increased car tax for all diesel vehicles which did not meet the emissions standards.

Which? investigates if diesels are truly that bad

Which? say that their tests are more challenging than official ones, including a unique motorway cycle. They say that on average, the 46 diesel cars that they have tested produce 0.31g/km of NOx. This is nearly 4 times the official EU6 limit, which is 0.08g/km.

They found the worst vehicle to be the Subaru Forester (2013-) which produced 2.02g/km of NOx. This is more than 25 times the official limit. Subaru were not available to comment to Which? when requested.

Additionally, they raise Renault as a concern. Previously, Renault cars have been highlighted by Which? as having one of the highest NOx averages across all manufacturers. All 5 diesel Renaults tested since 2017 appear in the top 10 most polluting diesel cars.

Renault have specified they understand that there remains ‘significant potential for improvement’ regarding the NOx levels. Mercedes have produced some cleaner cars, however. The E220d 9G-Tronic diesel produced just 0.023g/km of NOx. This is less than the average petrol car, producing 0.27g/km of NOx in Which? tests.

‘Diesel has a future, and we’ve invested about 3bn Euros into diesel development. Our new engines are both highly efficient and produce low levels of NOx,’ says a spokesperson from Mercedes Benz

So what if you buy diesel?

Cities around the UK are looking into Clean Air Zones. Oxford has also proposed a Zero Emission Zone. These plans mean phasing out petrol and diesel cars entirely. This means starting with non-zero emission taxis, cars, light commercials and buses banned by 2020 from certain roads. Furthermore, all non-zero emission vehicles across the city centre will be banned by 2035.

London has a current congestion charge zone, which has now added a T-Charge. This means that anybody driving a petrol or diesel car that doesn’t meet EU4 requirements will have to pay an extra £10 on top of the £11.50 fee.

Commencing 8th April 2019, the T-Charge will be replaced by the ULEZ (Ultra Low Emission Zone). This means anybody driving a non EU6 diesel will have to pay an additional £12.50 on top of the regular £11.50 daily fee.

Which? Magazine say for those regularly driving in and around London can visit tfl.gov.uk and search for ULEZ vehicle checker to see if your vehicle will be affected. 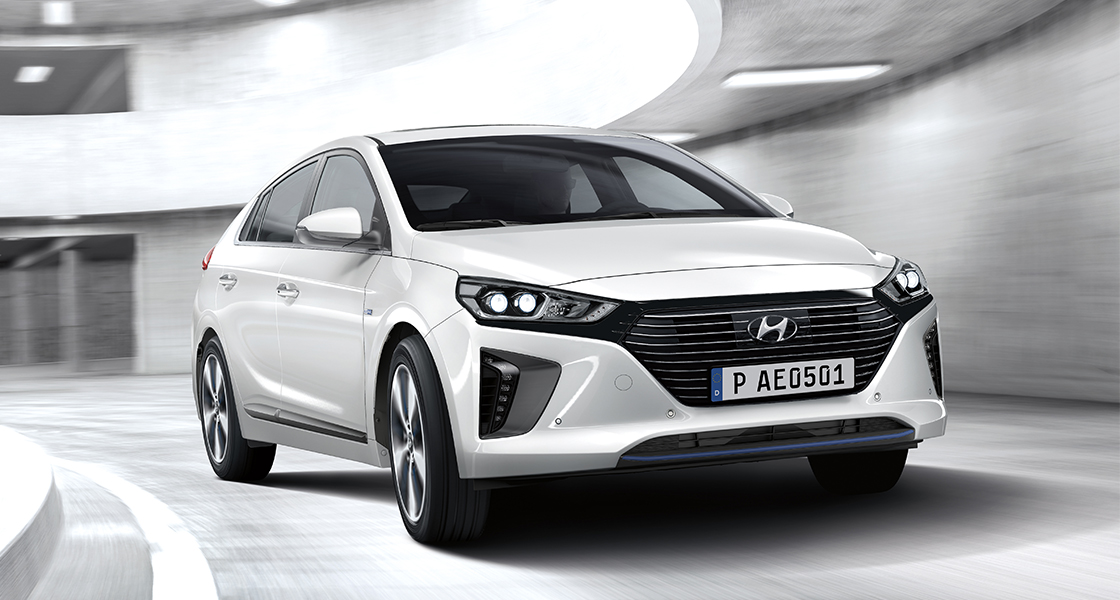 The Ioniq Electric is one of the greenest cars available according to the Next Green Car rating.
The Iconiq Hybrid is available from Westwood For Just £319 Per Month. Click here for more details

So, which is actually better? Petrol, hybrid or diesel?

Which? shows that diesel isn’t always the best economical choice of vehicle for motorway driving anymore. Hybrids should be considered. Diesel still is best in economy for towing, however. Although, petrol and hybrids shouldn’t be discounted. The petrol hybrid Volvo XC90 has a braked tow of 2,400KG and the all electric Tesla Model X tows 2,250KG, meaning that there are other alternatives.

‘Diesel is dying and a lack of faith in manufacturers is the final nail in the coffin. Petrol is still good for low NOx, but it seems hybrids have them both beat – or at least some do. More hybrids are appearing and as the technology continues to evolve, there will be an ever-diminishing reason to buy diesel. If electric doesn’t work for you, now is the time to go hybrid’
Which? August 2018

You can read Which?’s expert reviews at which.co.uk/cars