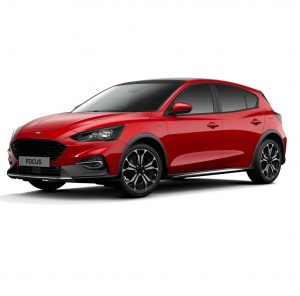 When the original Ford Focus was released, it was a game changer. It almost instantly became the benchmark against which all other cars in the sector were judged – We’re often asked by our car hire customers for a ‘Focus sized car’ for instance. Fast forward to today and a few iterations later, the mighty Focus is still amongst the most popular cars on the road and deservedly so.

In today’s competitive car market, SUV’s are incredibly popular and the market for ‘Crossover’ vehicles – production cars which have been given a higher ride and gruffer styling to give an SUV ‘look’ has been a direction many manufacturers have headed down. So have Ford finally done the same with the Focus to create the Ford Focus Active X? Well, almost!

The Ford Focus Active X is certainly a little taller than the standard Focus and it has extra cladding round the wheel-arches as well as having more rugged styling, but it’s not ‘quite’ a crossover and this is a good thing!

One of the best things about the Ford Focus and what’s made it such a popular car in all its guises is its incredible driving dynamics. It’s responsive, precise through the corners and gives exactly the right amount of feedback through the controls and steering wheel.

When a standard car becomes a crossover, driving dynamics and some of the fuel economy are often sacrificed to give that commanding driving position and ride height. Crossover sales tell us that this is a trade-off many are willing to accept, however, Ford have played a blinder with the Focus Active X, by appealing to the those who want a little extra ground clearance and a little SUV styling but still want an engaging drive. It’s chunkier than the regular Focus, but not quite a Crossover….. we’re calling it a ‘Crossunder’ until the motoring industry either chooses a better name or adopts ours…… you read it here first!

How Much is The Active X – Car Hire From Westwood

The 2020 version of the Ford Focus Active X is an exciting car, available to hire from Westwood from as little as £299 per month.

Contact Westwood today and find out about how you could cut your costs, improve your image and get behind the wheel of this impressive new Ford!