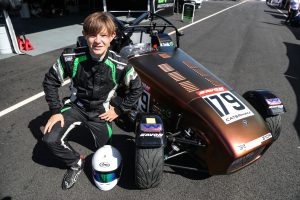 Last week, we caught up with Lewis to find out about the exciting weekend of Caterham racing he’d just taken part in on the Cadwell Park circuit at the start of the month, which resulted in a hard earned podium finish.

Taking place over the whole weekend, Lewis described the race as chaotic. With practice laps on Friday and a qualifying run, Lewis started the main race on Saturday towards the front of the pack and held onto his 4th place for much of the race. With a large gap between him and third place, Lewis set the 2 fastest laps in the whole race in order to catch and overtake the 3rd position holder and stayed in 3rd for 20 minutes before taking 2nd place.

With three laps to go, Lewis’ skillful driving allowed him to finally overtake the lead car. Unfortunately, the gearbox failed in Lewis’ car which cost him victory, but with only two functioning gears he still managed to finish in 5th place.

Sunday’s race began with a determined Lewis reclaiming 4th place within the first lap and back in 2nd place by the 3rd. Lewis managed to close a 7 second gap between him and the leader to a mere 1.2 seconds, but then, with only 5 minutes to go, a tiny underbraking error led to Lewis making a ‘detour’ and by the time he rejoined the track, he’d dropped to 4th place. Fighting all the way, Lewis valiantly managed to snatch back 3rd place before the end of the race and secured a hard earned spot on the podium after a thrilling weekend of racing.

A third place after a weekend’s racing gave Lewis his first chance to stand on the podium, but this small taste of victory clearly wasn’t enough for this talented young racer and his next weekend of racing, this time at the renowned Thruxton circuit, saw Lewis taking the top spot and finishing the weekend in a well deserved first place. Well done Lewis!

“Thank you to Westwood, for the continued support and sponsorship of me over the past 2 years. I very much appreciate Westwood’s generosity of sponsoring me and allowing me to continue the sport which I love.”

The Caterham Racing car needs little introduction. Originally designed and produced by Lotus from the late 1950’s through to the 1970’s, a design then bought by Caterham cars who still produce them to this day, the Caterham 7 had a long string of motoring victories behind it before it was famously banned in America in the 60’s as well as in the UK in the 70’s for being “Too fast to race”. The Caterham racing scene has a ladder of divisions and Lewis races in the Caterham 7 310R Championship, describes as the ‘Ultimate Incarnation’ of the Caterham Academy car.

For those unfamiliar with the Caterham 7, this is a small, light, raw, racing car in which the driver and the car are directly connected with nothing in between to help, save for the driver’s own skill and courage.

Lewis’ car, with wrap and graphics from Pinnacle Signs, has a 1.6 152 bhp engine, which doesn’t sound all that remarkable until you realise just how incredibly light this car is. This gives the 310R a better power to weight ratio than a Porsche 911. Make no mistake, this is PROPER racing!

It’s a matter of great pride to see the Westwood Logo featuring so prominently on such an incredible race car, along with the logo of our good friends, Link Contracting. We’re delighted to support the success of such a promising young driver.

Just like all the other competitors, we’re behind Lewis all the way!