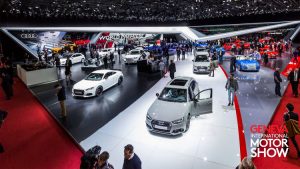 Part of a hat trick of reborn Lagonda model ideas, each powered by battery and destined for production as soon as 2021, the wardrobe-doored Vision concept is very similar to many other grand tourers we’ve seen over the years.

These range from Gerry McGovern’s work at Lincoln, to the same company’s Vignale concept tourer from the last century. In fact these doors present all sorts of technical difficulties including passing side impact tests in the US, which were once described by Aston Martin’s chief engineer as “picking the car up and throwing it at a telephone pole”. Other Lagonda concepts include an SUV and a coupe.

The press pictures of this car that Aston Martin showed us present a rather snouty beast, similar to the Valkyrie but without that car’s somewhat redeeming weirdness. In fact, on its stand in gunmetal grey, it looked a formidable road burner, with lovely short overhangs and a prominent – if very low-mounted grille.